A sunny cold day was on hand for the beginning of the 111th Chicago Auto Show. Held February 9th thru the 18th in the McCormick Place North and South Exhibit Halls, this year’s show had close to 1,000 vehicles on display. In addition, there were 18 new vehicle unveilings.

Ford Motor Company took advantage of the show to tout their Explorer Police Interceptor which is produced in the Southside of Chicago. The ‘Chicago Assembly’ Torrance Ave plant is the oldest continuously operating Ford plant in the country. In addition to the Police Interceptor this plant will produce the Explorer ST, the Hybrid Explorer and the Lincoln Aviator. With the exception of the Mustang, Ford will stop producing cars for the North American Market in 2020. They sight low demand for cars and will focus their efforts entirely on the more profitable SUV and truck segment. Over the last 5 years relatively low gasoline prices and increasing SUV fuel efficiency has shifted consumer preferences away from passenger cars. This is a bold move and it will be interesting to see how this affects Ford dealerships and consumer perception of the brand.

The president and CEO of Jaguar Land Rover North America Joe Eberhardt was on hand to unveil the redesigned Range Rover Evoque. With an MSRP of $42,650 this has been a very popular mid-sized SUV for the company. In his introductory speech Joe highlighted an interesting statistic that between 2015 and 2018 the average age of a Jaguar customer has dropped from 57 to 51. For a high-end performance brand to move their appeal this quickly is rare. It appears that introducing an SUV and multiple engine/price points for their F-Type coupe was successful in attracting younger buyers.

Ram Trucks introduced a new line of chassis cabs and their multifunction pick-up truck tailgate. The new tailgate features a swing-out option and has the capability of supporting 2,000 lbs. Toyota highlighted revisions to their Rav4 Off-Road, Sequoia TRD Pro and Tacoma.

Although 1% of all vehicle sales in North America are electric, MotorWeek awarded the 2019 Driver’s Choice ‘Best of the Year Award’ to the Jaguar all-electric I-Pace. This electric vehicle (EV) accelerates from 0-60 in 4.5 seconds and has a cruising range of 234 miles.

These numbers are impressive for a five-passenger luxury utility vehicle. With a mid-level equipped model priced around $75, 850, this will remain out of reach for the average buyer. The EV segment does have the attention of most auto manufacturers with improvements to plug-in range and reliability being trumpeted every year. However, as long as gasoline remains plentiful and relatively inexpensive, the EV segment will continue to be an asterisk on most manufacturer sales reports.

It is interesting to note of the 18 new vehicles unveiled at the show, only 5 are cars. The industry continues to trend away from passenger cars into crossover vehicles, trucks and SUVs. It is obvious low gasoline prices and an upbeat economy are fueling the shift.

This year’s Chicago Auto Show offered something for everyone. It is clear several manufacturers are focusing on trucks, crossovers and SUVs. Regardless, if you are an enthusiast or just like to look at cars attending this show is an excellent way to spend a February day in Chicago. 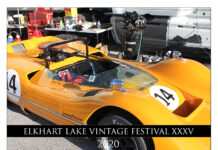