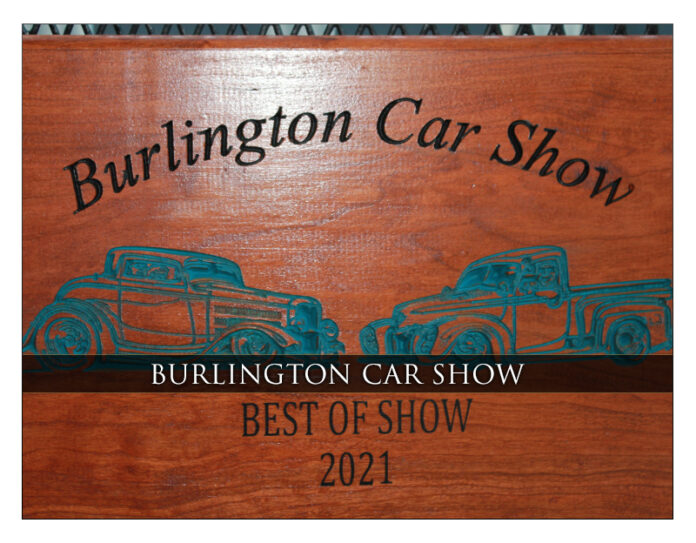 
After 27 years of living in the city of Chicago, I have moved to Indiana.  The state that brought you great movies like Hoosiers, Breaking Away and Rudy. It is also the birthplace of movie stars (that liked cars) James Dean and Steve McQueen.  In September as summer begins to surrender to fall, the town of Burlington, IN (population 528) holds the Burlington Fall Festival.  The town is located about 14 miles due West of Kokomo (once a thriving automotive manufacturing town).  Although the Festival organizers weren’t sure of the exact year the festivities began, those who I spoke with believe the event has been held for the last 20 years (or so).

The car show participant fee was $15.00 with all proceeds supporting the town’s 4th of July fireworks fund.  The show had 118 entrants that ranged from a Model T to a 2018 Corvette.   The cars and trucks were broken into 6 classes with all vehicles judged by teams of two.  Judging points were awarded based on the cleanliness of the vehicle’s exterior, interior, engine and trunk.  There were also 5 specialty awards for such areas as ‘best paint’ and ‘engine bay.’  The top 5 vehicles in each class were awarded wooden plaques that were made from locally sourced wood and hand finished by the festival organizers.

In addition to the car show, the festival featured an arts and crafts barn, bake sale, bingo tent, a farm tractor display and carnival food trucks.   There was a Festival Queen and her Court who were charged with selling raffle tickets.  The Queen’s duties also included handing out the car show awards to the winners. The local high school band had a booth selling soft drinks and bottled water which was very much appreciated given the sunny +90 degree day.

It has been over 3 decades since I’ve attended an event in a town this small. I found the same enthusiasm and passion for cars at this show as I’ve found at Amelia Island and the Pebble Beach Concourse.  In fact, I contend the passion is deeper given the folks I spoke with restored the cars themselves.  The simplicity and genuine nature of this event made it extremely fun and a perfect way to spend a sunny late summer day in central Indiana.  It is great to be in America.