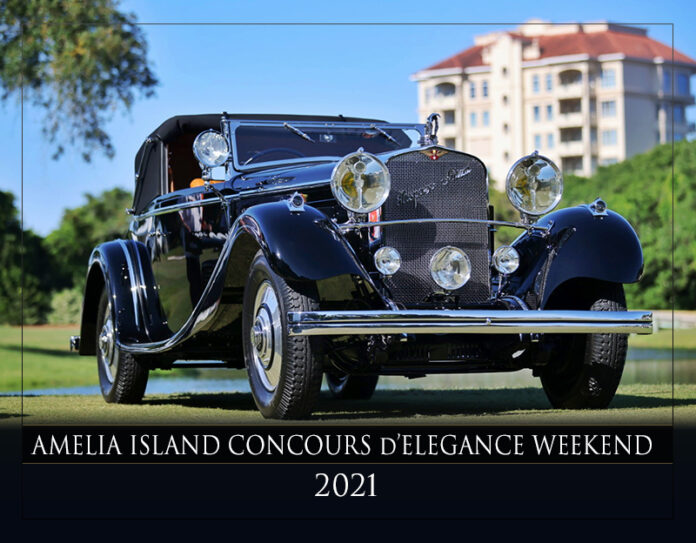 
Sunny, humid weather greeted the masses who attend this year’s Amelia Island Concourse d’Elegance.  Due to the Virus, the event was moved from the usual date of early March.  The weekend began on Friday with the fifth annual Porsche Club of America (PCA) Werks Reunion at the Amelia River Golf Club.  This event was created by the PCA to celebrate the Porsche brand and provide an environment to view rare as well as current model Porsches.  There were two sides to the event with the ‘Porsche Coral’ holding 500 Porsches that were (predominantly) driven to the reunion.   These cars are not judged and offer a casual setting to talk to owners and view models from most production years.

There were 165 cars in the judged event broken into 13 classes.  Judging is not based on a traditional scoring sheet but rather on the story of the car and its’ owner.  Each class is awarded 1st, 2nd and 3rd place plaques which adds to the car’s story.  There were also 20 car focused exhibitors which complemented the event.  The PCA began in 1955 with just 12 enthusiasts and now boosts over 140,000 North American members.    With major celebrations such as The Werks Reunion combined with local chapter events, it is no surprise PCA membership is growing at 1.5% annually.

Saturday morning’s Cars and Coffee at The Ritz-Carlton Amelia Island drew 480 registered entrants.  Parked on three of the hotel golf course fairways, all makes and models of cars are invited with strong participation from local car clubs.  This free event allows folks to enjoy a cup of coffee and view a very wide range of cars. Surprisingly, a few of the cars were displayed the following day at the Concourse.

From the beginning, the Amelia Island Concourse celebrates the automobile by choosing two winners; a Best in Class passenger car and Best in Class racer.  The 1926 Hispano-Suiza H6B Cabriolet is a rare car fashioned by the craftsman of the time.  The Chevrolet powered 1974 Shadow DN4 raced successfully winning the final (shortened) Can-Am series.  In July 2020 while racing at Road America this car became airborne flipping end-over-end by the Start/finish line.  Although it suffered severe damage, it was restored back to its racing days for the Concourse.