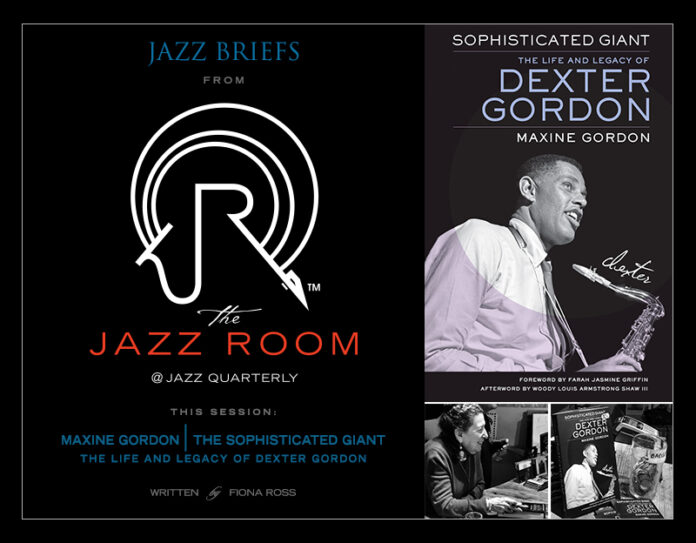 Maxine Gordon's recently released book ‘Sophisticated Giant: The Life and Times of Dexter Gordon’ is no ordinary jazz biography. It is a book that transports you into the reality of a Jazz musicians’ life, the highs and lows, the hardships and the inexplicable power of Jazz – beautifully written by an author whose passion for ensuring Dexter’s story is told honestly, is inspiring. Dexter Gordon was indeed a ‘Sophisticated Giant’ but when you read the book, you can’t help but feel there are actually two sophisticated giants here.

I was fortunate enough to attend the London book launch event and would like to share a little of this experience with you.

I had not been to Honest Jon’s record store before and I was a little ashamed of this. Established in 1974, it is one the of few records stores in London that specialises in Jazz. I really should have been there before. Maxine Gordon explained, that when she was taken there in April:

I was walking down the road, trying to find the store and literally heard the music of Dexter Gordon streaming out of a shop door in the distance. The beautiful sound of his saxophone playing with Herbie Hancock on the magnificent ‘Watermelon Man’. I felt like I was in a film. I put my map on my phone away and just followed the music. Not sure if I found the store of if it found me. I honestly think the latter. I walked into this gorgeous store, transported back in time, surrounded by vinyl, the sounds of Dexter Gordon, wine glasses and Jazz chatter. It was buzzing. Maxine was behind the counter signing books and talking about her book and her life with Dexter. The crowd were thrilled and just couldn’t get enough. The signing queue went right to the back of the shop and didn’t seem to ever end. I said a quick hello to Maxine and then decided to spend the evening just watching and taking in the atmosphere – a voyeur for the night – and what a truly magical night it was. 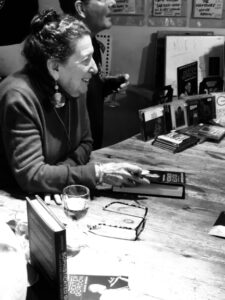 After about an hour, Alan Scholefield from Honest Jon’s, formally introduced Maxine to the audience, explaining that she would be reading from the book. His speech was filled with such emotion, that there were in fact tears in his eyes. This event truly meant something. He explained that:

You could sense the excitement and the crowd were thirsty for Maxine’s stories about her time with Dexter. You realise very quickly that this is no ‘Jazz wife’ and these are so much more than anecdotal stories. This is the life of an incredible woman. Maxine spent her teenage years listening to Miles Davis and Coltrane at Birdland and the Village Vanguard. She was Gil Evans road manager, produced Shirley Scotts album and crucially helped many musicians understand the business of Jazz – and all of this, and more, was before she married Dexter Gordon. After Dexter’s death, among many things, she also completed a master’s degree in Africana studies. Understanding the cultural history of Jazz was crucial not only to telling the story of Dexter but in understanding the world he was part of. This is very clear in the book. 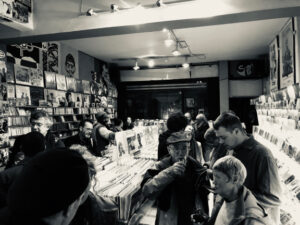 There is something about Maxine that is so very special. She exudes an energy and love for Jazz that is addictive. She read from the book and the audience feel silent. You could literally feel a warmth from the audience while they – and I – were completely captivated by her words. This energy radiates from her book. But this love for Jazz is not just about her love for Dexter Gordon and his music, but the truth and reality of the life of a Jazz musician. She is a huge advocate for the lesser known jazz musicians – and for women. I was extremely honoured to have been the first person to interview her about the book and found out at the time, that she only wanted to be interviewed by women and African Americans. A brave and significant statement which evidences her drive, passion and understanding for the world she was and still is a very big part of.

‘when we listen to Dex­ter, we know that he brought everything to his music, and the good, the bad, and the ugly were transformed when he played his horn’
- Maxine Gordon

I left the evening feeling like I had been part of something very special. A gathering of wonderful people who were not only fans of Dexter Gordon and his music, but who also came to understand the strength and grace of Maxine Gordon and her work. I came home, immediately wanting to read the book again. And did. Maxine Gordon is an inspiration.