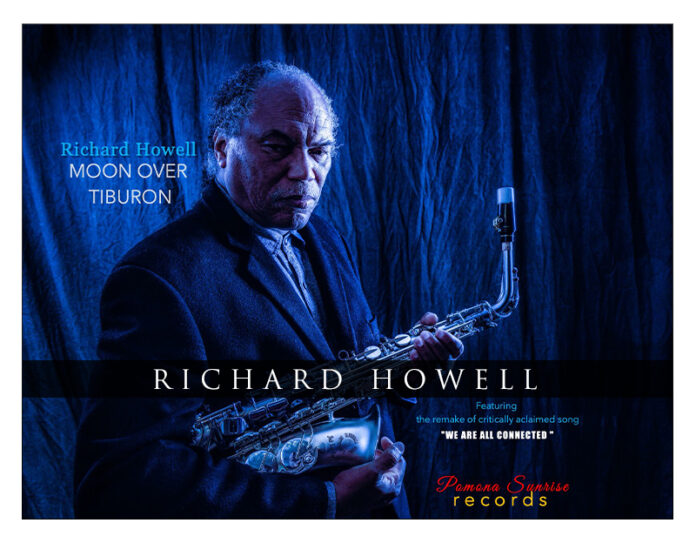 Moon Over Tiburon - Richard Howell's first solo album in a while with the Release Date: November 12, 2020. There were plans to record in the future with his group Richard Howell and Sudden Changes, BUT 2020 brought unforeseen challenges. So, Richard enlisted alumni from his group RHQ like the soulful virtuoso pianist Frederick Harris and bassist Gary Brown and from Richard Howell and Sudden Changes the extraordinary talents of the youngster Elé Salif Howell and master percussionist David Frazier while introducing a few more bright and talented younger creatives, trombone prodigy Jasim Perales, dynamic bassist Nick Panoutsos and spirited pianist Ian McArdle. His music cannot be quarantined! So, moving with tenacity and determination the new solo album by Richard Howell enjoys an incredible mix of multi-generational souls bringing light to the darkness.

One of the many highlights of this album is the remake of the critically acclaimed song “WE ARE ALL CONNECTED” Richard kept getting request to rerelease the original after it had been performed at memorials, Passover seder, union meeting openings, gatherings involving unity and performed at middle school and high school combo bands in all parts of the world, it even made to the Oval Office during the Obama Administration A song of the times, he chose to offer another version with the thought of it connecting even more people, again bringing light.

"My effort is to keep the music moving forward while respecting the past and present. It is Contemporary Jazz with historic perspectives culminating in social justice, human dignity, and community service.I stay true and honest to the art form by creating the pathway for new and exciting ways to present root music that heals our souls. I call my music BRIDGE MUSIC. Jazz that is contributive rather than competitive." -Richard Howell