A report ranked the streetwear label above Gucci and revealed Nike has risen to No. 4.
Streetwear brand Off-White is the hottest fashion label worldwide, according to The Lyst Index's quarterly report out Wednesday.

CEO and designer Virgil Abloh's Off-White has risen 33 places in 2018 to surpass Gucci and Balenciaga at the top of the fashion world. Fans of the Italian brand include Lenny Kravitz, Serena Williams, Naomi Campbell, Busy Philipps, Bella Hadid and Tracee Ellis Ross, who wore Off-White while hosting the American Music Awards this year.

At Paris Men's Fashion Week in June, Abloh showed off his Off-White collection with mom jeans for men and Bart Simpson riffs, telling The Hollywood Reporter, "It's my ode to the teenager with the subtext of Louis Vuitton in the air. This is the first show where Off-White is sort of unhinged from the résumé. It's distinctly a teenager vibe." At Paris Fashion Week in the fall, Abloh turned the runway into a track with sports-couture pieces and Nike shoes.

A Cocoon Of Timber Hovering Over The Bay 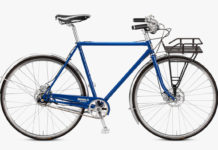 Why Open A Watch Factory & Manufacturing Facility In Detroit? | Shinola