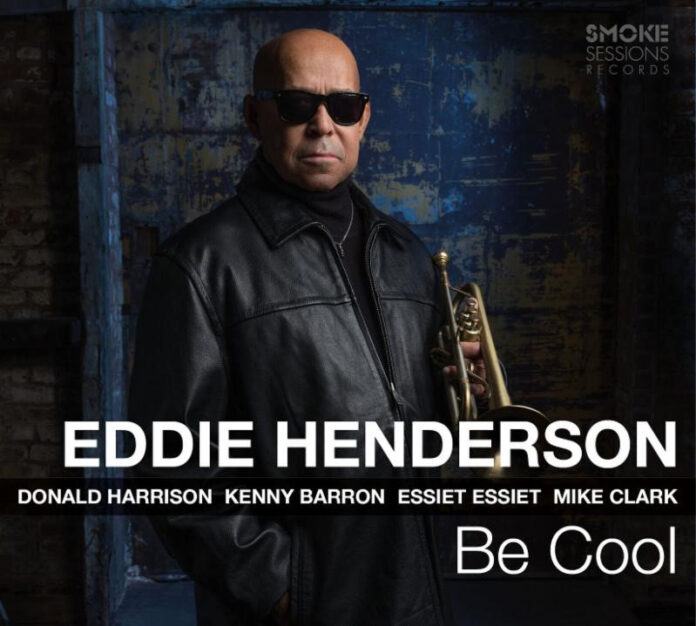 Before he walks out the door on his way to a gig, 77-year-old trumpeter Eddie Henderson always gets two words of advice from his wife: be cool. The legendary trumpeter has taken that mantra to heart, and on Be Cool, his new release on Smoke Sessions Records, he shows just how hot cool can get.

Of course, if you're going to be cool it helps to surround yourself with the coolest of the cool, and Henderson has done just that: his smokin' quintet also features saxophonist Donald Harrison, pianist Kenny Barron, bassist Essiet Essiet, and drummer Mike Clark. Together, the band conjures smoldering funk, lush ballads, broad-shouldered swing, and bristling bop -- in all, a prismatic display of the many facets of cool.

"For me, 'be cool' means compose yourself and don't act jagged, musically or personally," Henderson offers. "One connotation is to not play so erratically, to push the envelope to the edge but not go over. It's like going fishing: if you're not prepared when you throw your line out there, you might catch Jaws instead of a minnow. Personally, it's about playing with people who love each other and share a good chemistry."

That's undoubtedly the case with the group Henderson has convened for his second Smoke Sessions outing as a leader. His relationship with Barron stretches back more than three decades, to the early days following his return to New York in the mid-'80s after a decade spent practicing medicine in San Francisco. He's been working regularly with Clark in recent years, especially in the Wolff & Clark Expedition, the drummers co-led band with pianist Michael Wolff. But they also share roots in the fusion bands of Herbie Hancock -- Henderson with Mwandishi and Clark immediately after with Headhunters. Essiet, meanwhile, has been a constant in Henderson's recent bands, while he's shared stages with Harrison under the auspices of the super-group The Cookers.

With compositions by Barron, Clark and Harrison, not to mention Henderson's wife and daughter, Be Cool recalls the title of the trumpeter's previous album, Collective Portrait. "I like my albums to have a wider scope than to just be a self-portrait of my musical taste," he explains. "This really is a collective portrait with a much wider spectrum of music. That's the nature of the game: you always want to grow each time you play, rather than just sit back and play what you feel comfortable with."

From now on, Eddie Henderson has a ready response whenever his wife chimes in with her regular reminder. With scintillating interpersonal chemistry, tasteful but captivating soloing, and a stellar melodic sense, one spin of this album is enough to prove that Henderson has taken the words Be Cool deeply to heart.

"Be Cool" was produced by Paul Stache and Damon Smith
and recorded live in New York at Sear Sound's Studio.