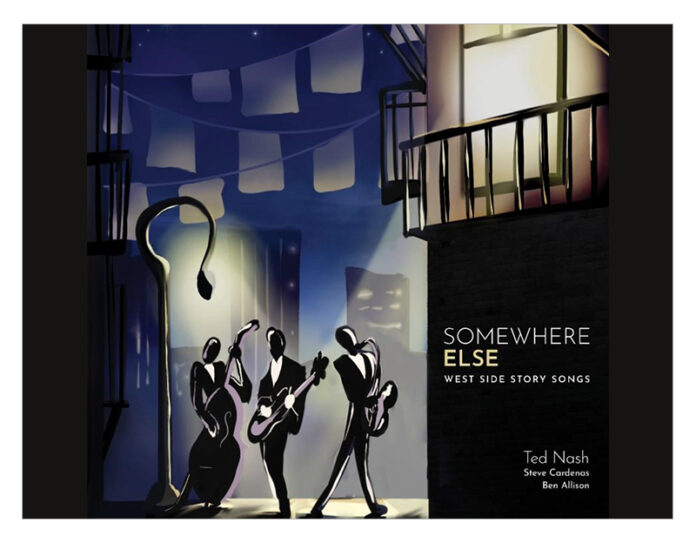 Two-time Grammy® winning composer and saxophonist Ted Nash releases his 15th album as a leader. SOMEWHERE ELSE - West Side Story Songs on Plastic Sax Records drops on August 16th. In Nash's own words:

"There was a moment backstage when I wiped a bead of sweat from my temple and glanced over at Steve and Ben. We shook our heads and laughed. It was the only way to express the gratitude and sheer joy we felt about the interplay and trust we just experienced during the past hour on stage at the Havana Jazz Festival.

"Our set, comprised of songs from West Side Story, was foremost a celebration of Leonard Bernstein's centennial, but also an opportunity for the trio to continue the tradition we have created interpreting wonderful songs by composers we love. (Our previous release, Quiet Revolution, was dedicated mainly to the music of Jim Hall and Jimmy Giuffre.)

"We were welcomed this particular evening equally by a persistent humidity and an enthusiastic crowd, many of whom lingered at the edge of the stage to connect with us as we gathered our gear a little later. 'You have to record this music,' the group implored.
"And it is because of their insistence we bring the songs to you on this album."

"Nash has that kind of instantly identifiable talent that makes the distracted pay attention." - Time Out Magazine

"Nash shows that technical brilliance and innovative indulgence only describe one side of jazz expression; beauty and delicacy are on the other." - Japan Times

"Excellence in jazz is all about the freedom to musically explore with an open mind and heart to ultimately find one's voice...Ted Nash achieves that plateau of performance." - Billboard Magazine