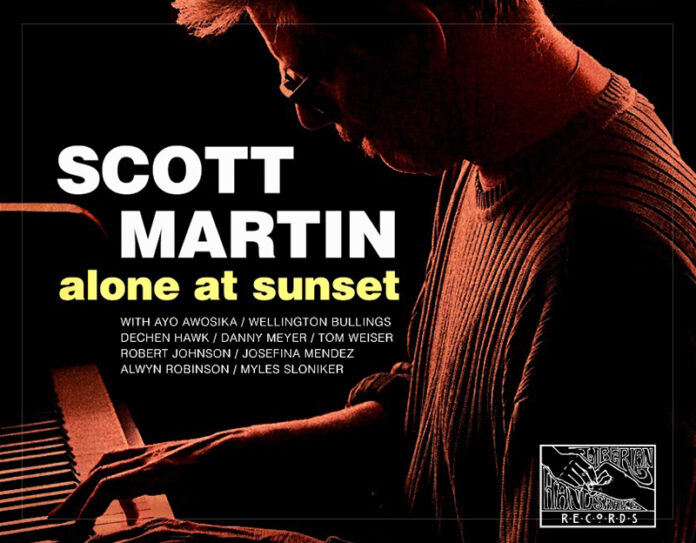 Liberian Handshake: A connection that began with the snap of a finger.

Working with a Peace Corps teacher in the rural, seaside community of Grand Cess inspired the goal of establishing a fund to help motivated students attend college.
Sales of our release, Scott Martin, Alone at Sunset, will donate 50% of net proceeds to educational outreach in Liberia in partnership the non-profit,
More than Me.

Future releases will aid with other worthy causes chosen by the artists involved.

ALONE AT SUNSET
Pianist Scott Martin has brought together a vibrant group of singer-songwriters and instrumentalists to create a collection of new, original jazz standards.
Recorded at the legendary Carriage House in Stamford, Connecticut by Grammy®-winning producer/engineer Jay Newland (Norah Jones, Gregory Porter, John Scofield), Alone at Sunset shimmers with energy and excitement that pull you inside the music, into the performance.

Drawing on influences spanning Thelonious Monk, Bill Evans, Herbie Hancock and McCoy Tyner, Scott Martin wrote the music for Alone at Sunset and invited his favorite singers to write lyrics based on their impressions of the songs. The result
is an album of a wonderful variety of voices, moods and colors unified by the pianistic and compositional style Scott brings to each piece.

Blending a pop esthetic from his early work with Carly Simon, Mariah Carey and cross-over jazz artists like Michael Brecker and Steps Ahead with his love of the classic jazz of the 50s and 60s, Alone at Sunset offers new music that sounds both fresh and timeless.