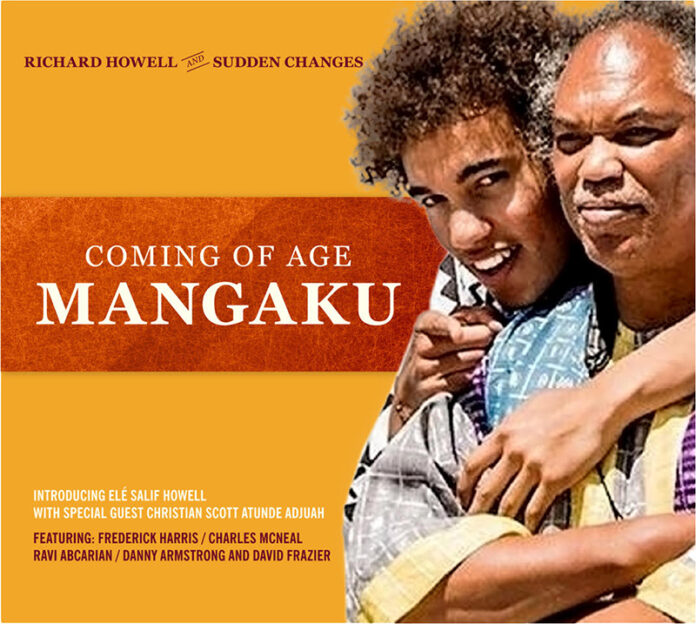 "I have the deepest respect for his musical abilities. He walks in the same path as the great ones: Joe Henderson, Don Myrick to be mentioned in the same light. I have a great belief in his talents. He will continue to make contributions in the time to come."
- Maurice White-founder of Earth Wind & Fire.

Tenor saxophonist, award winning composer, and producer Richard Howell is a Bay Area treasure who has come into his own as a bandleader after decades of producing and supporting other artists. San Francisco's KQED aptly describes Howell as a jazz "Jedi master," COMING OF AGE - MANGAKU has a strong spiritual component and is an album of honest original Richard Howell compositions. The albums introduces Howell's youngest son, Elé Salif Howell, a spirited teenaged drummer joined by the virtuosic pianist Frederick Harris, veteran bassist Ravi Abcarian, and scorching alto saxophonist Charles McNeal, with an appearance from "Stretch Music" pioneer trumpeter Christian Scott aTunde Adjuah.

Raised in Los Angeles, Howell made his Bay Area jazz debut in the early 1980s with a triumvirate of legends, joining trumpeter Don Cherry, bassist Charlie Haden, and drummer Billy Higgins at the Great American Music Hall. He spent years touring with R&B greats Etta James, Chaka Khan, and more. The music of Richard Howell reflects "fresh" innovation from all of these experiences.

"The New Voice of Jazz is an Elder!"

"My music celebrates diversity as it bridges, unites, and merges the experience of all listeners. I define it as Bridge Music".
- Richard Howell