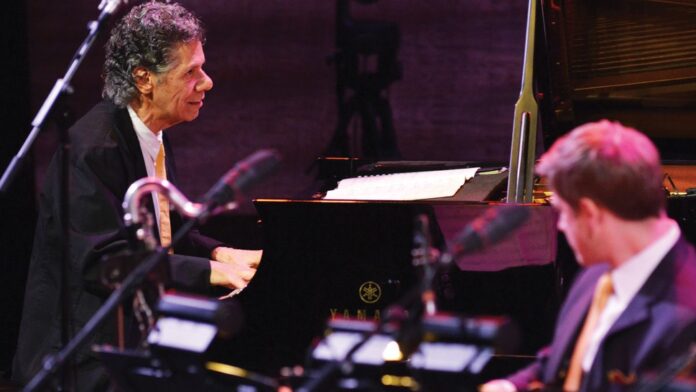 Jazz at Lincoln Center celebrates the genius of Thelonious Monk in all three of its venues. The third annual Monk Festival took place on April 5–8 with luminaries including Chick Corea, Herlin Riley, and Helen Sung.

Chick Corea joins the Jazz at Lincoln Center Orchestra with Wynton Marsalis for three nights of Corea Plays Monk in Rose Theater. Jazz legend Corea is a 22-time Grammy Award winner, DownBeat Hall of Famer, and NEA Jazz Master. On these nights he honors Monk—the high priest of modern music. Corea is an old friend of Jazz at Lincoln Center and has worked closely with Marsalis on many historic occasions.

Friday and Saturday night in The Appel Room offer a spectacular show entitled Crescent City Monk with Herlin Riley & Friends. It has been selected as one of Jazz at Lincoln Center’s 30th Anniversary Landmark Concerts because it combines three of JALC’s foundational elements: the city of New Orleans, the music of Thelonious Monk, and the Jazz at Lincoln Center Orchestra’s original drummer, New Orleans native Herlin Riley

On Friday through Sunday at Dizzy’s Club Coca-Cola, pianist Helen Sung presents Thelonious Monk: Himself. Sung is a graduate of the Thelonious Monk Institute of Jazz Performance (at the New England Conservatory) and won the Kennedy Center’s Mary Lou Williams Jazz Piano Competition.

“Monk was such a competent player and composer; so complex, yet so simple,” explains drummer extraordinaire Herlin Riley. “He broke a lot of the rules of harmony in creating his pieces. He had to become very skilled because his peers and other musicians couldn’t really hear his harmonies. In breaking the rules his music became such a large part of the whole canon of jazz music now that we are all celebrating his life. As musicians you have to stay true to your conviction and stay true to the spirit that is inside of you. As artists we have to create something that may be going against the grain a little bit, but still it has such profound significance.”

The New York Times calls Riley “a shining exemplar of New Orleans rhythm.” He was born into a musical family and was always surrounded by music. Riley has worked with Ahmad Jamal for many years, and he has recorded with Marcus Roberts, George Benson, Harry Connick Jr., Dr. John, and many others. He was also a member of Wynton Marsalis’ small groups and the Jazz at Lincoln Center Orchestra (known then as the “Lincoln Center Jazz Orchestra”).

As drummer and bandleader of Crescent City Monk, Riley has some big shoes to fill, considering the great drummers Monk employed: “Frankie Dunlop, Ben Riley (no relation), Max Roach, and Art Blakey. Four of them! As a drummer, I feel very honored to be music director for this show. I’m standing on some big shoulders in doing so.”

He is joined by two fellow New Orleans natives: bassist Reginald Veal and pianist, NEA Jazz Master, and patriarch of the Marsalis family, Ellis Marsalis. Adding to the mix is the always amazing and surprising pianist Eric “ELEW” Lewis, saxophonist Todd Williams, Cuban percussionist Pedrito Martinez, and pianist Isaiah Thompson, who wowed the crowd in the JLCO season opener Handful of Keys. A special guest tap dancer and a surprise vibraphone player will round out the lineup. Riley, Veal, and Williams were all members of Wynton Marsalis’ small groups.

The vibe is there. “Being from New Orleans, the city is always with me, that’s part of who I am,” he confirms.

If anybody marched to the beat of a different drum, it was Thelonious Monk. “Jazz is freedom of expression, which is part of the human spirit, and also being true to who you are as an artist. It may be different instruments, perhaps with a different beat, but still the essence of it is expression and improvisation and being in the moment. That always will allow jazz to strive and thrive,” Riley concludes.

Be part of the third annual Monk Festival at Jazz at Lincoln Center this April 5–8. It is a true celebration of expression.