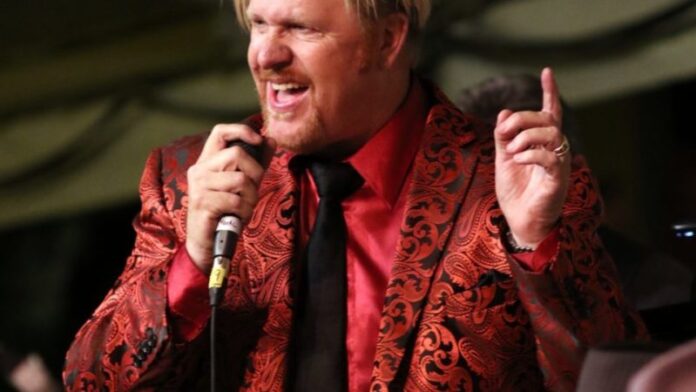 Dale had the honor of serving as a firefighter - both aerial and municipal - over 17 years. As California has taken hold of the headlines with the worst forest fires in history, note that Dale Head's firefighting career includes:

City of Sacramento Firefighter for 9 years, during which he was a part of a team that:

Dale Head brings the MindWinder Orchestra to the Harris Center for a dynamic presentation featuring songs in a multimedia live performance. His high-powered, dynamic orchestra delivers classic rock, pop and jazz in a highly entertaining and innovative show.

With his high energy and smooth vocals, Dale delivers classic rock tunes, as well as great pop and jazz songs, all orchestrated for big band in a highly original take on these musical genres. With a natural command of both rock and big band swing, Dale sings, plays trumpet and leads his talented group of players through a dynamic ride.  For complete information, click here.

Recent Review From the Midwest Record:
MINDWINDER
DALE HEAD/Swing on the Rocks: With a Mose Allison styled voice leading the way, Head has Paul Shaffer bringing his B3 for the whole set as they give unsuspecting rock tunes a big band treatment making this almost the wackiest Vegas set you ever heard that really isn't. Pomo? Quite possibly but not intentionally. If you're a boomer, this is going to hit home through the side door. Powered by right on chops throughout, this is one of those sets that's so deliciously different, you might not know which way to turn first. - Chris Spector

Dale Head released his latest album, Swing on the Rocks (MindWinder Records) on July 13, 2018, and expands the Great American Songbook with 14 classic rock songs re-imagined in an innovative big band format. Swing on the Rocks explores "soundscapes" in a nod back to the progressive rock of the 1970s. Headphone icons on the album notes indicate where these features enhance the listener's experience.

Dale's background is in rock music, dating back to Montrose, The Beach Boys, and Boston in the mid 1970s, as well as his own 1995 solo album MindWinder. Head follows up his 2015 release Swing Straight Up (a classic big band jazz album) with Swing On The Rocks' epic collection of songs, spanning the genre from "13 Women" (the A-side of Bill Haley's 1954 hit "Rock Around The Clock") to the 1997 Grammy®-winning song "Criminal" by Fiona Apple.

Each song on Swing on the Rocks is a unique take on a well-known rock classic from artists such as Van Halen, Rush, Van Morrison, and the Eagles. Enlisting phenomenal arranger Rick Walsh (who worked with iconic artists like Linda Ronstadt and Metallica in its legendary San Francisco Symphony performance), Dale uses his powerful and dynamic vocals to reinvigorate these rock classics.

On Swing on the Rocks, Dale is surrounded by an 18-piece big band style orchestra that features amazing guitar solos and the impressive stylings of Paul Shaffer (of the CBS Orchestra on Late Night with Dave Letterman) on the Hammond B3 organ throughout, creating a riveting roller coaster of a musical ride. Dale's emotional trumpet and flugelhorn work also shines in this collection on "Into the Mystic" and "Murder By Numbers". According to Steve Price, one of the founding members of Pablo Cruise, "this album is a wonderful blend of big band and rock, with just a hint of blues."

"You're insane, and I mean that in the best possible way. You're going to blow their minds." ~Paul Shaffer, bandleader, The World's Most Dangerous Band

"This is a must listen if you truly love music. It's not like anything you've heard anywhere. Dale brings his amazing talent to the table once again. As a lover of all music, this is one of my favorites." ~Steve Price, founding member, Pablo Cruise

"Swing on the Rocks succeeds at expanding the Great American Songbook in a highly enjoyable and innovative manner." ~Scott Yanow, jazz journalist