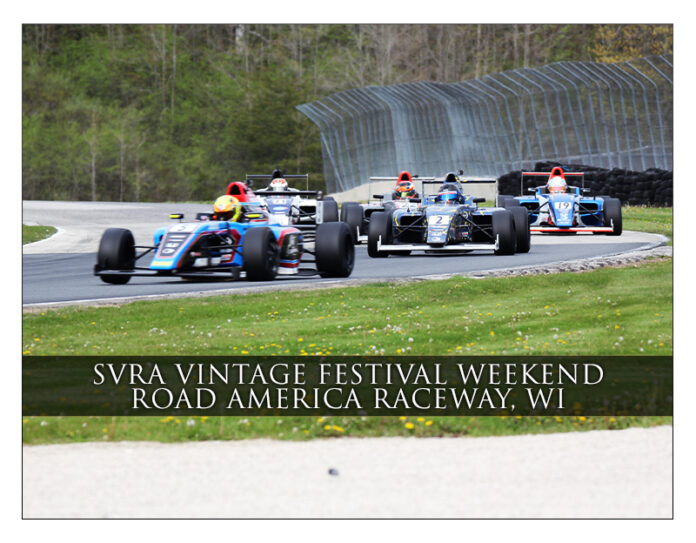 
Road America opened their 2021 racing season on May 15 with the Sportscar Vintage Racing Association (SVRA) Spring Vintage Festival.  Attracting over 220 entrants, this annual event also featured Miata Series and Formula 4 (F4) Series races.  There were 16 SVRA groups with the F4, Porsche and Miata entrants placed into 4 special groups.  Racing groups are determined by a number of factors which focus on engine size/bore, car model production numbers and year produced. To race in SVRA sanctioned groups the car must have been raced 5 years prior to race day.

Founded in 1978, the SVRA is the largest vintage racing organization in the United States.  The organization is focused on holding safe, fair and fun racing events at legendary race tracks around the country.  The Road America event was the 6th race of a 17 race schedule that covers 13 states.

Launched in 2014, the F4 series was designed to offer young drivers an affordable way to transition into open wheel racing.  All cars are equipped with a 160 HP Honda Civic-R engine which powers a 1,254 LBS Ligier Automotive constructed chassis.  These drivers hale from all over the world with aspirations of someday driving a Formula 1 machine.

Having visited a number of road racing tracks around the country, Road America is one of my favorite.  Opened in 1955, the first race was won by F1 World Champion Phil Hill.  This 4.048 mile racetrack has been driven by some of the greatest racers in the world.  The track history, extremely friendly staff and beautiful WI countryside make for a most enjoyable day.