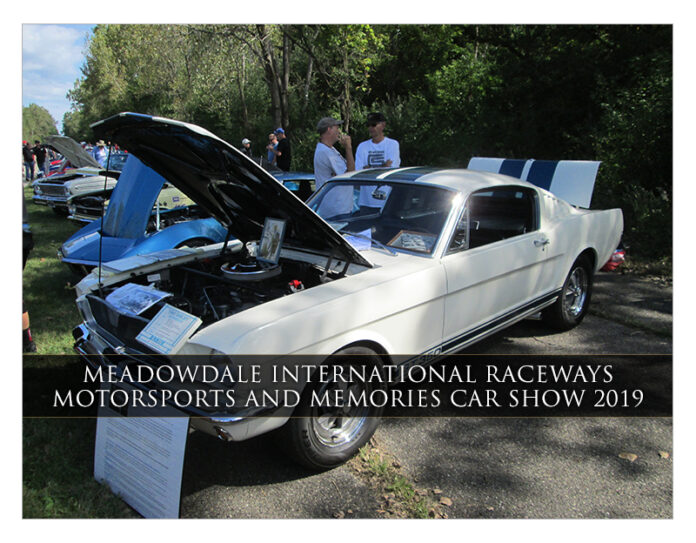 A beautiful sunny 80 degree day set the stage for the 11th annual Meadowdale Raceway Car Show. Held on the abandoned Meadowdale Racetrack, this event drew over 300 cars. The 3.27 mile race track was opened in September 1958 and is located about 50 miles northwest of downtown Chicago in Carpentersville, IL. Built by a local developer of commercial and residential properties to bring people to the area, the first race drew close to 100,000 spectators. From September 1958 thru 1968 the track hosted events sanctioned by USRRC, USAC, SCCA attracting drivers such as Roger Penske, Mark Donohue, Sam Posey, Bobby and Al Unser. The track closed in 1969 falling into disrepair. In 2009 the Meadowdale International Raceways Preservation Association (MiRPA) a 501(c)(3) was formed to preserve what remains of the original racetrack which is now a Kane County Forest Preserve.

Spector admission was free with show car participant’s entrance fees going to support the MiRPA. The show cars were judged by members of the MiRPA with 4 special and 12 class trophies awarded. A majority of the cars were American Muscle with a nice mix of British and Italian makes. This year’s event recognized the 60th anniversary of the Meister Brau Racing Team. Based in Chicago and funded by The Peter Hand Brewery Company, they were a very successful team in the early 1960’s. An added bonus to the day was a few of the team members held a round table discussion group.

An interesting subsection of the show was the National Corvette Restorers Society (NCRS) event. This worldwide organization was founded in 1976 with an objective of preservation, restoration, and enjoyment of all Corvette models and configurations. The NCRS currently judges 1954 through 2002 models separating them into 14 divisions. There were 9 Corvettes judged this day with NCRS judging teams taking about 1 ½ hours to scrutinize each car’s operations, chassis, interior, exterior and mechanicals. The passion and knowledge these judges hold was something to witness.

There was no better way to spend a warm late summer day than at a car show. The venue of a preserved closed race track was inspiring as some of the show cars actually raced at Meadowdale ‘in the day.’ Aside from the weather, I knew this was going to be a great day as a recording of John Wayne reciting the Pledge of Alliance was played over the loud speakers to open the show. This very fun and easy to attend event will see me next year!