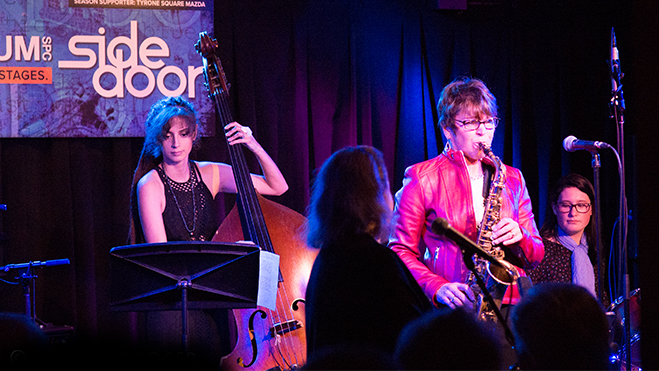 This particular Thursday was a night to remember at The Palladium’s Side Door when renowned Saxophonist Valerie Gillespie shared the stage with an all-female band, featuring Karen Benjey, piano; Jennifer Medina, stand-up-bass and 15 year old Meghan Lock on drums! In Celebration of Women’s History Month they not only played songs written by women but sang them as well and beautifully! 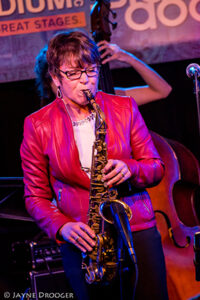 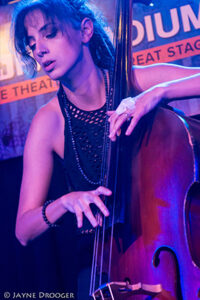 Recently Valerie has had the distinct honor of being the cover story and feature article in Saxophone Today Magazine. Additionally, she leads her own jazz group that frequently performs in the Tampa Bay area and has produced numerous CDs in which she plays all the saxophones, flutes, and clarinet, and sings as well. Her most recent jazz CD is entitled “Lush Life” which includes music by Chick Corea and Billy Strayhorn.  She is also frequently the featured soloist with The Florida Orchestra and has performed at many jazz festivals including The Suncoast Jazz Classic and The Clearwater Jazz Holiday.

One song in particular touched my heart, which she dedicated to her devoted parents for encouraging her talent, originally done by both Peggy Lee and Mel Torme, “The Folks on the Hill”.

Karen Benjey, on piano, is another accomplished artist with 3 CDs to her name who has performed around the world and has a voice as smooth as silk!

The Palladium’s Side Door is an award-winning space of 175 cozy candle-lit tables and chairs with beer and wine available. It’s a perfect atmosphere for national recording as well as newly emerging artists. Thurs. night was the perfect example with these amazing musicians combining seasoned professionals with two very young talents, one on drums the other on bass! 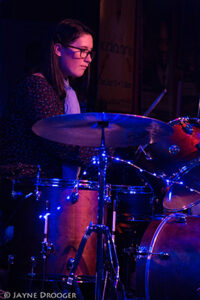 Lorri Hafer grew up in a musical family in New York City.  She is best known as lead vocalist with the Hillside Singers on their worldwide hit, “I’d Like To Teach The World To Sing In Perfect Harmony”.

Lorri has sung with the Glenn Miller Orchestra, with Les Brown’s Band of Renown, and as special guest vocalist with Buddy Morrow and The Tommy Dorsey Orchestra.  She and her husband, Mike were headliners on “Music of Your Life” jazz and big band cruises for almost a decade having suffered a devastating stroke last year she stood to sing for the first time proving the strength and beauty of her voice is back as beautiful as ever. She joined the band during two separate sets, in one singing “How High the Moon” and “ So Many Stars”. Then later “I Can’t Give You Anything But Love” dedicated to her granddaughter, Harmony.

The Al Downing Tampa Bay Jazz Association partners with The Palladium in promoting live Jazz in the area from time to time. For more information on this organization, please visit their website.

Jayne Drooger is a photographer and occasional writer residing in the state of Florida.