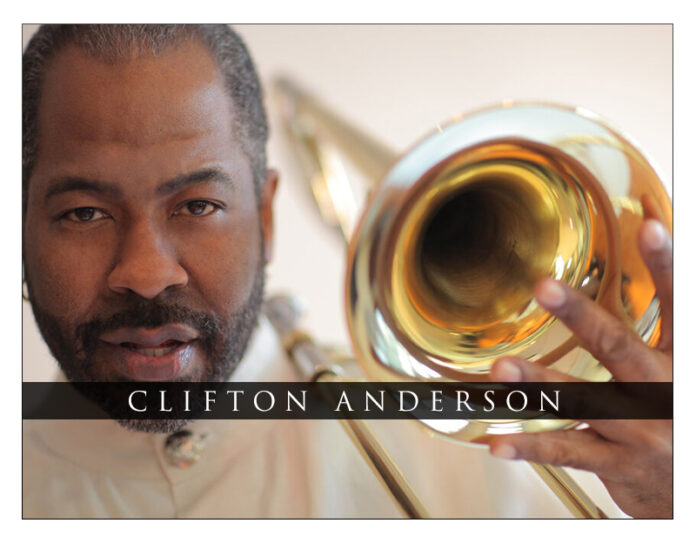 Clifton Anderson
Been Down This Road Before

Been Down This Road Before is the title track from ​Clifton Anderson’​s new album, which shares the same name. ​It is a thought-provoking musical message, delivered at a time when racism, greed, injustice and a deadly pandemic are jeopardizing our ability to harmoniously exist with one another and with our planet. As always, Clifton’s music serves to challenge and strengthen our resolve to move forward and elevate. ​

“Been Down This Road Before” is a poignant perspective on the historic racial struggles that persist in America and throughout the world. Along with Clifton’s trombone, the song features the extraordinary vocalist Andy Bey joined by a stellar line-up including John F. Adams, keyboards and background vocals; Tom Barney, acoustic bass; Steve Jordan, drums; Victor See Yuen, percussion; and Mala Waldron and Angela Workman on background vocals.

Clifton composed the music for Been Down This Road Before following the murder of Trayvon Martin in 2013. Unfortunately, he felt the necessity to write lyrics to the music after witnessing the constant succession of murders of people of color by police and vigilantes that have mostly been unanswered by justice. The song is an amalgamation of his musical journeys and his perspective on the redundant failures of our society, all expressed through one memorable song.

Clifton Anderson received his first trombone from his uncle, the legendary Sonny Rollins, at seven years old, and from that time on was destined to accomplish great things in music. An alumnus of the Fiorello LaGuardia High School of Music and Art and The Manhattan School of Music, Clifton has recorded and toured with his own groups since 2009. He has released four solo recordings under his name, ​And So We Carry On,​ Decade, L​andmarks​, and newly released B​een Down This Road Before.
​
Throughout his musical career, Clifton has had the opportunity to perform on many of the world's most revered stages. He has also recorded with a wide variety of musical icons, including luminaries such as McCoy Tyner, Dizzy Gillespie, Slide Hampton, Lester Bowie, Stevie Wonder, Keith Richards, Paul Simon, The Mighty Sparrow, Dee Dee Bridgewater, Muhal Richard Abrams, Wallace Roney, and Abdullah Ibrahim.

Widely regarded for his work with his uncle, Clifton has appeared on ten of Sonny's recordings and produced three CDs and one DVD for Sonny's DOXY record label. Clifton's playing, writing, and musical concepts are the embodiment of his musical travels and life experiences. He is well known for his rich personal sound on the trombone, and his astute abilities as a composer and musical interpreter. www.cliftonanderson.biz